An international reputation for fascine mattresses

In the spring of 1849 ‘an English engineer’ had shown up on the dike in Sliedrecht, ‘asking for Messrs Schram and Prins’.Undoubtedly, the locals will have come in droves to see the stranger. They would have understood that he was looking for Aart Schram Azn and Leendert Martinus (Leendert) Prins. Both men were employed in the company owned by Leendert’s father Arie Prins Czn.One of Leendert’s brothers later wrote regarding the visitor: ‘This gentleman had an address or had been informed by an engineer from Hamburg (…). At the time the company had done some projects there and Schram and my brother had been there too.’

The visitor turned out to be the British railway engineer C.B. Vignoles. This distinguished engineer had recently designed the longest bridge in Europe, crossing the Dniepr River at Kiev. However, in 1848 the construction site of the bridge had been damaged by ice and in the spring of 1849 floods had caused further damage. Because of the strong current the piers had been severed from their foundation. This state of affairs had brought Vignoles, on advice from his Hamburg colleague, to Sliedrecht.

This anecdote illustrates that as early as the middle of the nineteenth century the contractors from the Sliedrecht area enjoyed an international reputation. This was not based on their dredging abilities, though Prins’ company was involved in dredging projects in Belgium and Germany in 1815, but rather because of the quality of their willow products and fascine matresses. Willow grove labourers from Sliedrecht and surroundings would weave withies into large mats known as ‘fascine matresses’ that were used as protection of riverbeds and embankments. Part of the skill was in manufacturing them but at least of equal importance was the ability of the labourers to place the brushwood, which was weighed down with stones, at the desired place at just the right time. This required a deep understanding of the water and the tides.

Abraham Caland, Pieter’s father and himself an engineer for the Water Management Authority in the province of Zeeland, summed up the importance of this technique succinctly.Fascine mattresses ensured that the ‘currents could not scrape along the sand but instead scraped over the brush mattresses, which are resistant even to the strongest currents, and they are so watertight that they won’t let even the finest sand or sludge penetrate’. On top of that, these protective mats were cheap.Leendert Prins found that out in Kiev. He wrote home that the company would have to settle for 8,000 guilders, excluding travelling and hotel expenses, for this project. ‘You must understand that we have to manufacture 6,000 square ells of fascine mattresses, otherwise the deal is off.’

From scooping to suction

Although the fame of the Dutch for making and installing fascine mattresses had spread as far as Kiev by the middle of the nineteenth century, the core of Dutch dredging activities remained with domestic projects into the last quarter of the nineteenth century. In the 1870s and 1880s the Dutch Water Management Authority undertook work in the rivers near Dordrecht and Rotterdam, followed by the Meuse, the Upper Merwede and the Waal rivers in the 1880s and 1890s. After several dike breaches in 1876 annual government expenditures for water management rose to about 3 to 5 million guilders, peaking at 6 million guilders in 1888.In 1877 the Ministry of Water Management, Industry and Trade was founded. All this government attention for the rivers meant that dredging contractors had an abundance of work.

Towards the end of the century the waterway improvement projects were nearing completion.To some extent the contractors had used traditional methods to carry out this work, i.e. wheelbarrows and spades, but bucket dredgers were introduced in the 1860s (see Chapter 2). Many marine contractors, however, were conservative and thrifty.

They undoubtedly agreed with Leendert Prins’s statement after he had witnessed steam engines in Kiev transport sand over relatively short distances. Shaking his head, he remarked: ‘All of that work could easily have been done by wheelbarrow.’

The construction of the Noordzeekanaal and the Nieuwe Waterweg caused the position of dredging contractors to shift: dredging changed from a labour-intensive sideline into its own separate industry with sophisticated equipment. This shift became clearly visible from the second half of the 1870s onwards. The Nieuwe Waterweg was officially opened in 1872 and the Noordzeekanaal in 1876. Within a short period of time both waterways no longer met requirements. The mouths of the waterways were blocked by silt, while newer ships had a deeper draught. As a result, a period of widening and deepening of both waterways started in 1896. Mechanical dredgers proved indispensable.

On 31 July 1894 a crew from Sliedrecht lowered a fascine mattress into the estuary of the Hollands Diep. A group of French-speaking visitors was impressed by the craftsmanship of the labourers. This photo shows the fascine mattress, which was woven by hand, floating over its destination and weighted down with stones. It is already partly submerged. From then on the crew had to wait for the tide to turn from high to low tide or vice versa because then the currents would be minimal for a brief period of time. The caption mentions that that moment had been calculated for half past eleven. The ‘sinking boss’ – the man in the hat – knew down to the second when to give the command to add the ballast to the edges of the brushwood mat. Only when the timing was correct did it lower into the desired location. If not, the current would push it past the destination and all work would have been in vain. 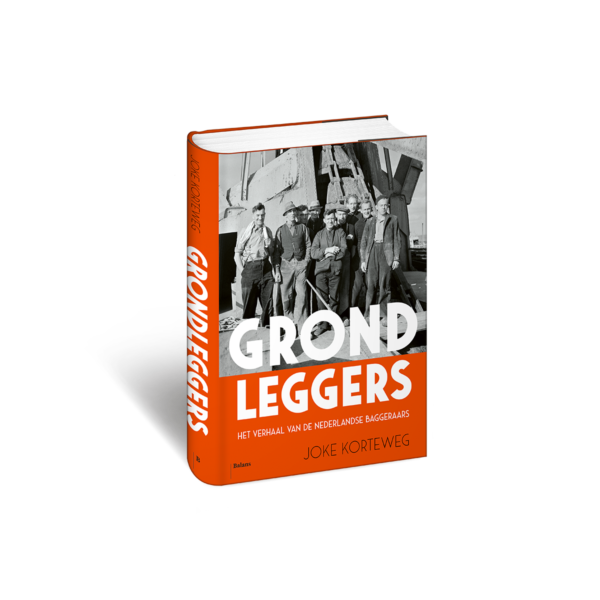